2020 was the year of virtual graduation ceremonies, shifting baselines and competing interests.  Despite these considerable challenges, we had no less than one BSc(Hons) and four PhD students graduate during the year.  It’s a credit to their determination and persistence that these talented individuals got their much deserved rewards for years of impressive effort. 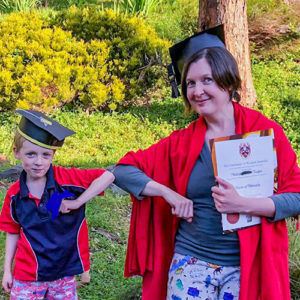 Melinda Trudgen was awarded her PhD for a thesis entitled “How to jump the garden fence: deconstructing the niche of range shifting plants to inform management in the Anthropocene” with the School of Biological Sciences at the University of Western Australia and with CSIRO Land and Water.  Her research investigated how cultivated urban trees can escape to become environmental weeds. This work used rosewood (Tipuana tipu), which is on the Australian Alert List as a potential Weed of National Significance, as a model species. Melinda’s research focused on climatic and edaphic factors that are likely to affect the potential distribution of this species, as a way of gaining insight into how urban plants ‘jump the garden fence’. Melinda was supervised by Bruce Webber, John Scott and Hans Lambers.

Edward Tsen was awarded his PhD for a thesis entitled “Landscape connectivity and keystone frugivores: Implications for the rare rainforest tree Ryparosa kurrangii B.L. Webber (Achariaceae)” with the University of Melbourne’s School of Biosciences and with CSIRO Land and Water. His research examined the impact of anthropogenic disturbance upon plant-animal interactions in tropical rainforests and the impact of this disturbance on plant population genetics. Undertaking fieldwork across North Queensland’s Daintree region and South East Asia, Edward’s thesis scope encompassed seed and pollen dispersal, camera trap fauna surveys, plant taxonomy and landscape connectivity.  Edward was supervised by Bruce Webber and Ian Woodrow. Edward went on to secure a role as a data analyst with the Victorian Environmental Protection Authority.

Juliana Pille Arnold was awarded her PhD for a thesis entitled “Modulating effects of the surrounding landscape matrix on plant-pollinator networks within remnant habitat” with the School of Biological Sciences at the University of Western Australia and with CSIRO Land and Water. Juliana was also awarded an Honorable Mention on the Dean’s List for her thesis.  Her doctoral research investigated the impact of environmental change on species interaction networks, focusing on plant-pollinator interactions in degraded landscapes in the Swan Coastal Plain, Western Australia. Her research assessed the processes limiting pollinator visitation in modified landscapes at a landscape scale, as well as elucidating the functional consequences of resource energetic constraints for pollinators on the reproductive output of plants in fragmented woodlands. Juliana was supervised by Raphael Didham, Bruce Webber and Jason Tylianakis. Juliana went on to secure a role as a Senior Zoologist with Biologic Environmental consultancy. 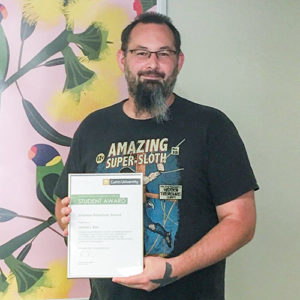 James Barr was awarded his PhD for a thesis entitled “Adaptive ecology of the King’s skink, Egernia kingii, in response to varying levels of predation risk, with a focus on caudal autotomy” with Curtin University and with CSIRO Land and Water. His research focused on predator recognition and anti-predatory behaviour in the King’s skink (Egernia kingii), and how these traits change when exposed to different levels of predation risk (from both native and introduced species), across isolated island populations in Western Australia.  James was supervised by Ruchira Somaweera, Bill Bateman and Stephanie Godfrey and went on to secure an internship with Curtin Innovation Central Perth (ICP) and BHP assessing mining impacts and biodiversity loss in regional Western Australia.

Glenn Maslen was awarded his BSc(Hons) for a thesis entitled “The effect of stinking passionflower (Passiflora foetida) on the nesting dynamics and success of freshwater crocodiles (Crocodylus johnstoni) at Lake Argyle” with the School of Agriculture and Environment at the University of Western Australia and with CSIRO Land and Water. His research investigated the spatio-temporal relationship between this invasive weed and the reproductive output of freshwater crocodiles at Lake Argyle in the Kimberley region of Western Australia. Glenn was supervised by Ruchira Somaweera, Bruce Webber and Raphael Didham. Glenn continued on in his role as a GIS analyst with Eco Logical Australia.

We wish all our new graduates the very best for their future careers.

Previous post:
Publications: 2020, the year that was
Coming up next:
We’re looking for help to map cotton bush in SW WA